This is how one of the biggest adventure of my life (so far) began.

Although I never stopped making AMV, I know I’m not a big name of the current AMV scene and left the top 10 a while ago. I really wasn’t sure I was legit for attending this event and expressed my doubts about it but as the Tracon staff insisted I thought to myself “hey, this is a once-in-a-lifetime opportunity that will probably never present itself again so let’s just go and see what happens!”.

So I’m being invited, the staff is taking care of literally everything for me, I can’t come empty handed. Should I bring chocolate, macarons, Eiffel Towers souvenir from Paris? I’ve got a better idea, let’s make a new AMV that we will premiere at the convention just before I get called on stage for the AMV contest!

It’s been a while since I went to a convention and I wasn’t sure what to expect of this guest of honor business but it turned out to be quite an adventure. 5 days in Helsinki & Tampere, guided visits, infinite food, taxi, killer hotel, private backstage room with my name on it (!!!), VIP all the way, double Nostromo interview, chat with Finish editors, handshakes and photos with fans (holy shit there are actual people who know me and like my stuff!). I wasn’t ready for this level of attention, everything was perfect and I hope I delivered a good enough performance.

The highlight for me was the screening of Umbrella Corp (beta™) in the amazing Tampere-talo auditorium. Damn, these people are serious about AMV! The convention was smaller scale than what I’m used to with Japan Expo (6 000 vs 240 000 visitors) but it was much more pleasant to attend with cool events such as cosplay, AMV contest, Final Fantasy concert, game/movie/anime symphonic orchestra/choir and other stuff but I was pretty busy and couldn’t see everything.

I was surprised by the quality of entries in the AMV contest. 50 videos were submitted, about half were pretty good and 10 were excellent. My job was to select the Best Execution and give a special award of my choice to any AMV. I called it “Nostromo Cyber Badassery Special Award 2000” and decided I would give it to the AMV I wish I had done. I finally came down to 2 AMVs, both deserving Best Execution and me struggling to make a decision. I was kind of relieved when I discovered on stage that the author of both videos was no other than WhiteDex (didn’t know you could send multiple entries to the contest) who also managed to get his hands on Best Action and Best Comedy. Turns out he didn’t have enough hands to carry all his trophies (see photo). Contest results here, photos 4 & 5 by Timo Virtanen and Noora Kurko.

I always say that there are 3 ways to start an AMV. You can start with a music that you want to edit with then look for matching footage, start with footage for which you need to find a music or you can start with nothing and run around in circles faster and faster until you build big enough inertia to reverse Earth’s spin buying you time to find a solution. I went with the 3rd option this time. Well, I promised I would produce something and I had a deadline but basically no idea or source. I went through my entire playlist several times but even the cool tracks I was keeping for future projects didn’t inspire me at that time. After 3 weeks I found the album Rain by Polyphonix. It was time to look for footage and edit.

What I had in mind when I started Umbrella Corp was pretty simple and was supposed to allow me to finish in time for Tracon. But new ideas emerged while I was filling my timeline making the project quite heavier to handle and forced me to send a beta version for the screening at Tracon. Basic editing was done but a lot of transitions were missing, some effects needed some more work, umbrella coloring was half done and only 10% of the video had been interpolated to 60 fps. You can’t really pixel peep on the big screen and it was a one shot so I guess it was ok. Well, nobody complained about the frame rate, color grading or my messed up key frames.

Frame by frame umbrella coloring wasn’t the funniest part of the process (about 100 frames). I tried to use color/chroma key tricks to avoid going frame by frame but the result wasn’t satisfying. I don’t have much to say about the editing or effects but I did try some new stuff on my transitions. I actually had to use my Sharingan on WhiteDex to steal his camera movement transition special skills. I didn’t know him at the time but since I had to watch all videos for the AMV contest, I took some time to analyse his techniques. This led me to FINALLY learn how to properly use keyframes bézier curves in Premiere. About time Nostro! It looks pretty cool but it requires so much trial and error, it’s not even funny.

Ok that should be enough about my life, here’s the plot (yes, there’s a plot and yes it’s part ripoff):

The year is 2027. It is a time of great innovation and technological advancement. It is also a time of chaos and conspiracy. Corporations have more power than the government. Everyone’s fighting for power. For control. The World doesn’t care about right or wrong. It’s all about power. And right now, none of us have it.

A group of freedom fighters have gathered to join forces against the Umbrella Corp, an organisation with strategic outposts all around the world and a very specific agenda. With the latest developments in ultra low frequency radiation atmospheric processors, they have the technology to take control of the global weather. Their new wave blasters network can artificially induce rainfall anywhere, anytime, putting them one step away from becoming the largest umbrella manufacturer on the planet.

It’s not too late, we can stop them. Join the fight! 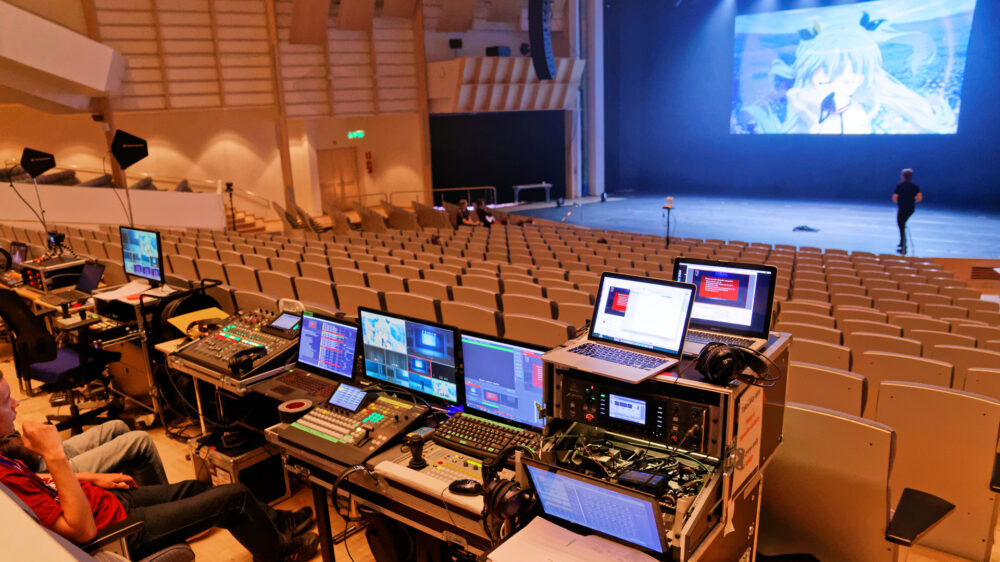 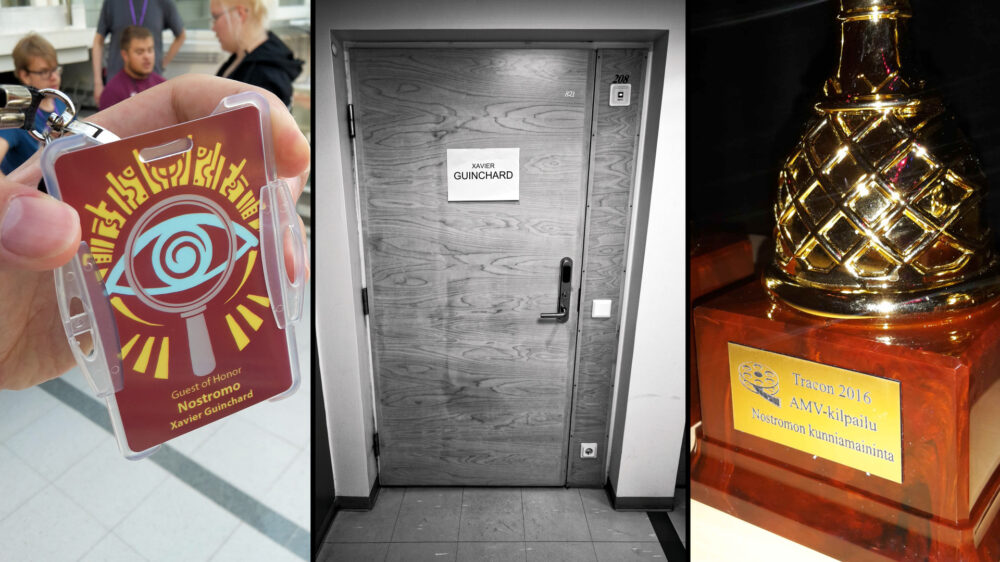 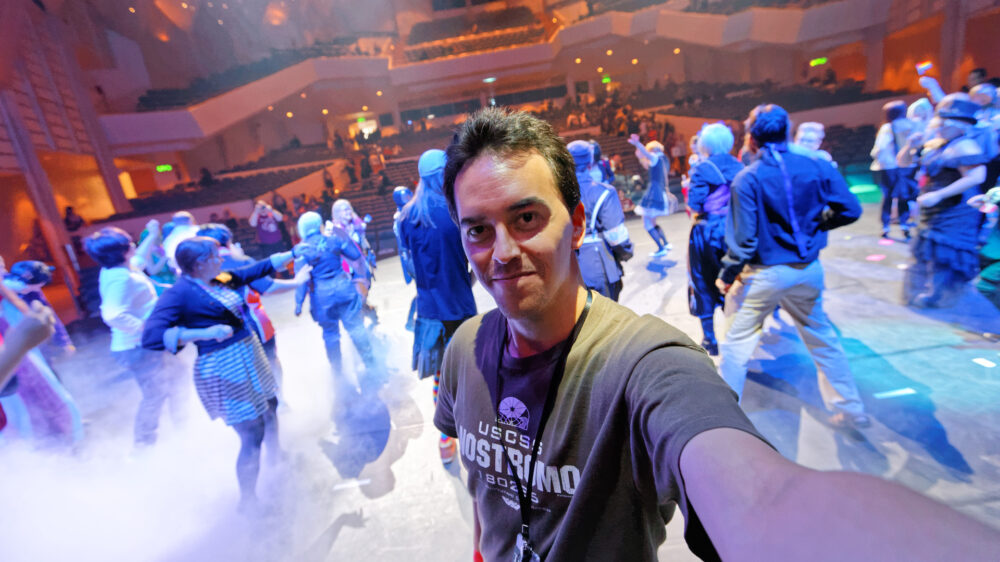 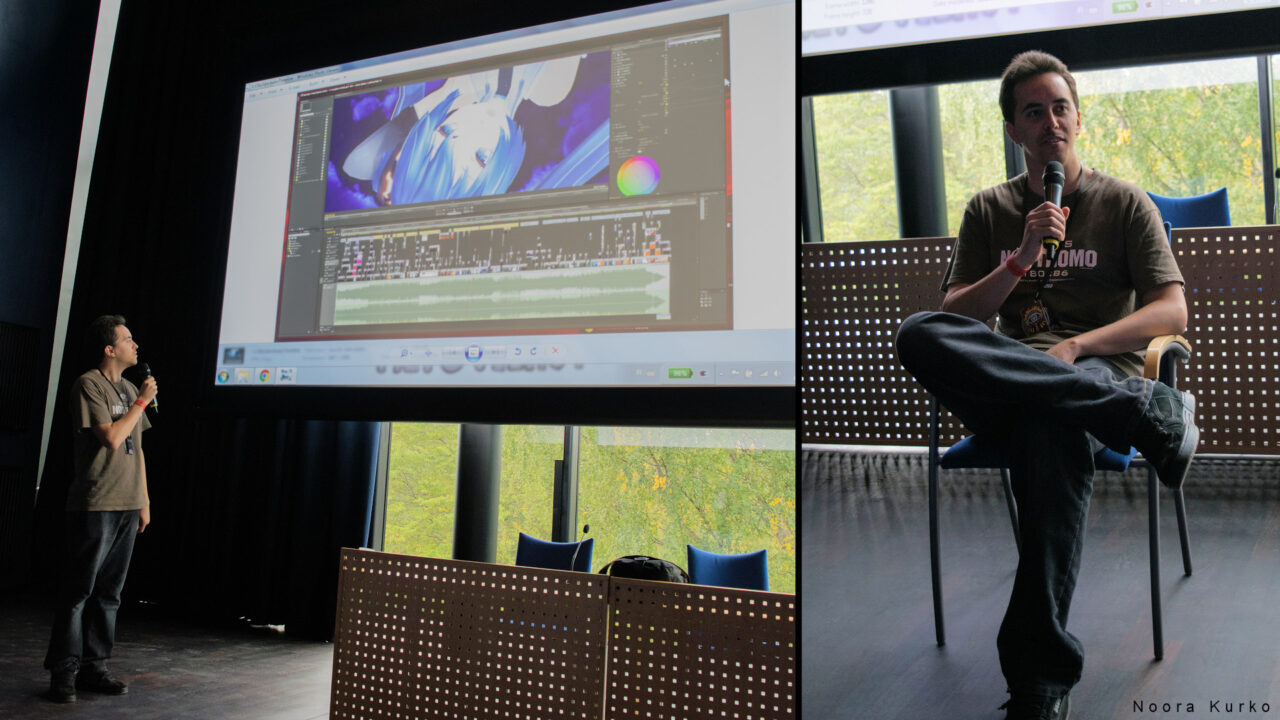 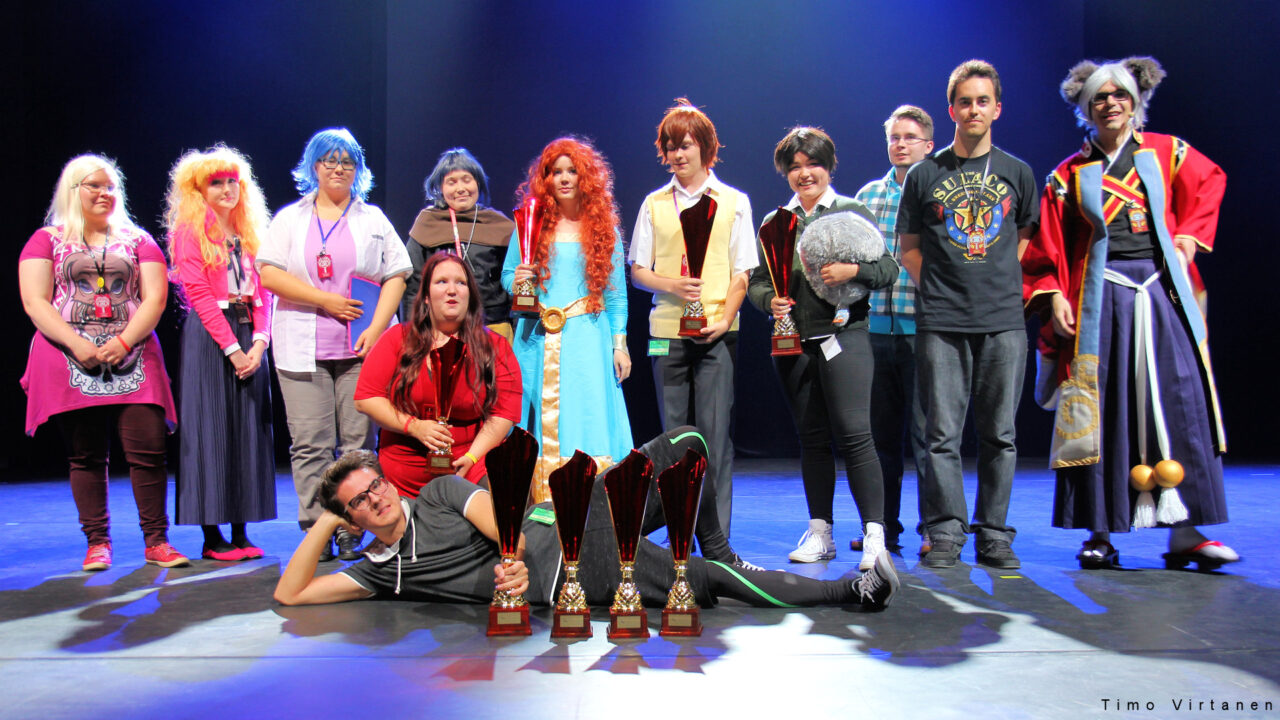 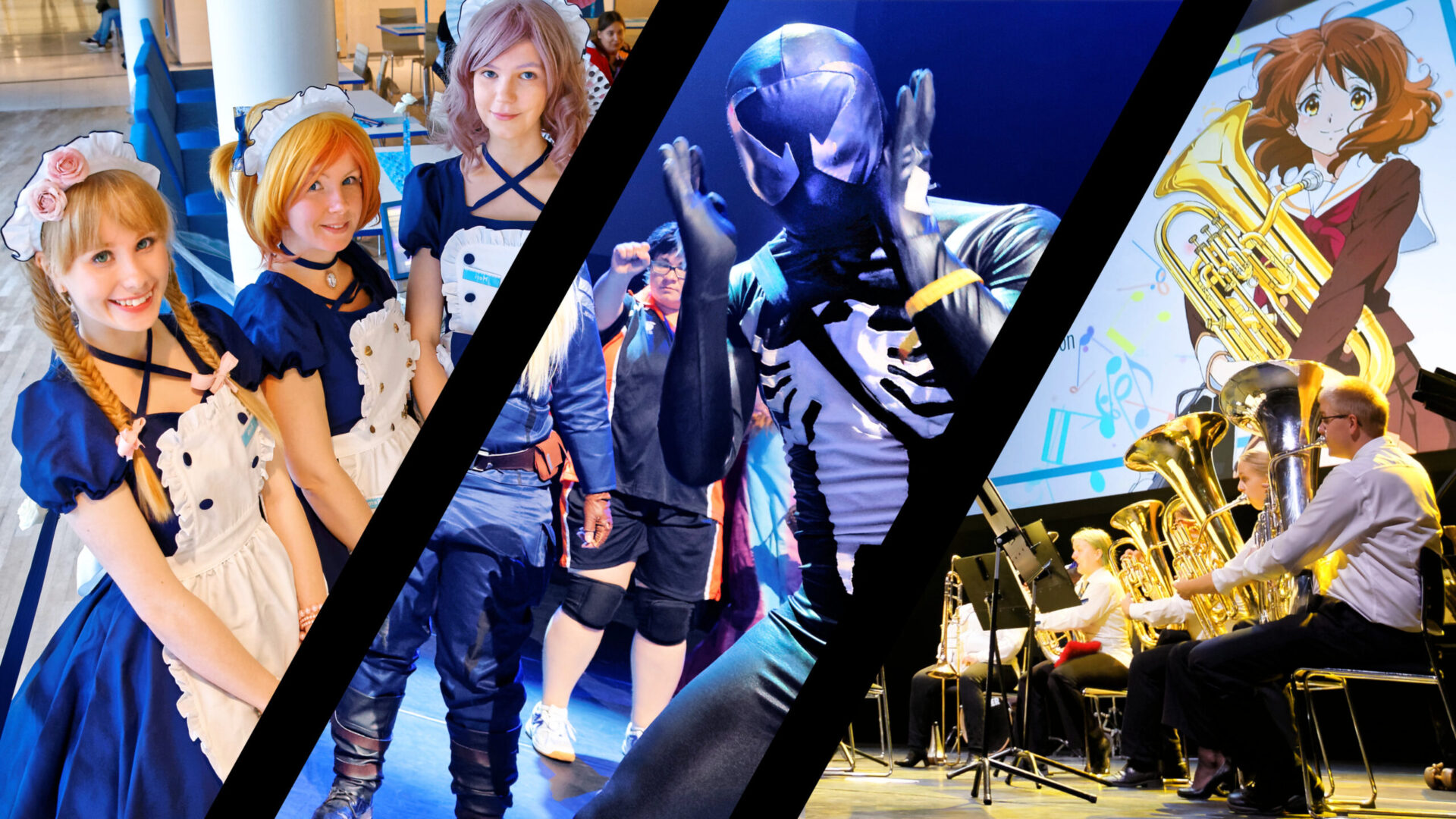 I haven’t been watching a lot of anime lately, maybe 1 or 2 series a year and my anime folder was pretty much empty so I looked everywhere, got a bunch of random stuff and spent a month preparing my footage. I filled my timeline with over 200 different sources but ended up only using half. I guess I could use my leftover for an other project.

As usual I used a lot of OP & ED, a few actual anime clips, 3DCG & music videos as overlays and even a perfume commercial. I didn’t run out of footage like I usually do but instead got stuck with clips that I couldn’t figure out where to put.

I started looking for music in May hopping to be able to start editing right away but finding the right piece was harder that expected. I went through my playlist several times, tried some stuff with various tracks but I couldn’t get anything interesting going. I subscribed to multiple YouTube music channels and randomly wandered around on Soundcloud for 3 weeks before finally discovering Polyphonix and Rain, their new album that just got out.

I chose Rain featuring Kanae Asaba that immediately gave me ideas, allowing me to finally start looking for footage. Finding Polyphonix also led me to a bunch of other cool artists that I’m saving for future projects.

Finding a path when someone has
Led you far away.
Can I get back to what I’d known?

Slipping away, something just fades
To oblivion.
It’s just too late. I can’t be saved.

Now that I have partaken in
What I can’t escape,
I can’t return. No other way.

If I can drown out all the noise
Searching for a sign,
Maybe the answer can be found. 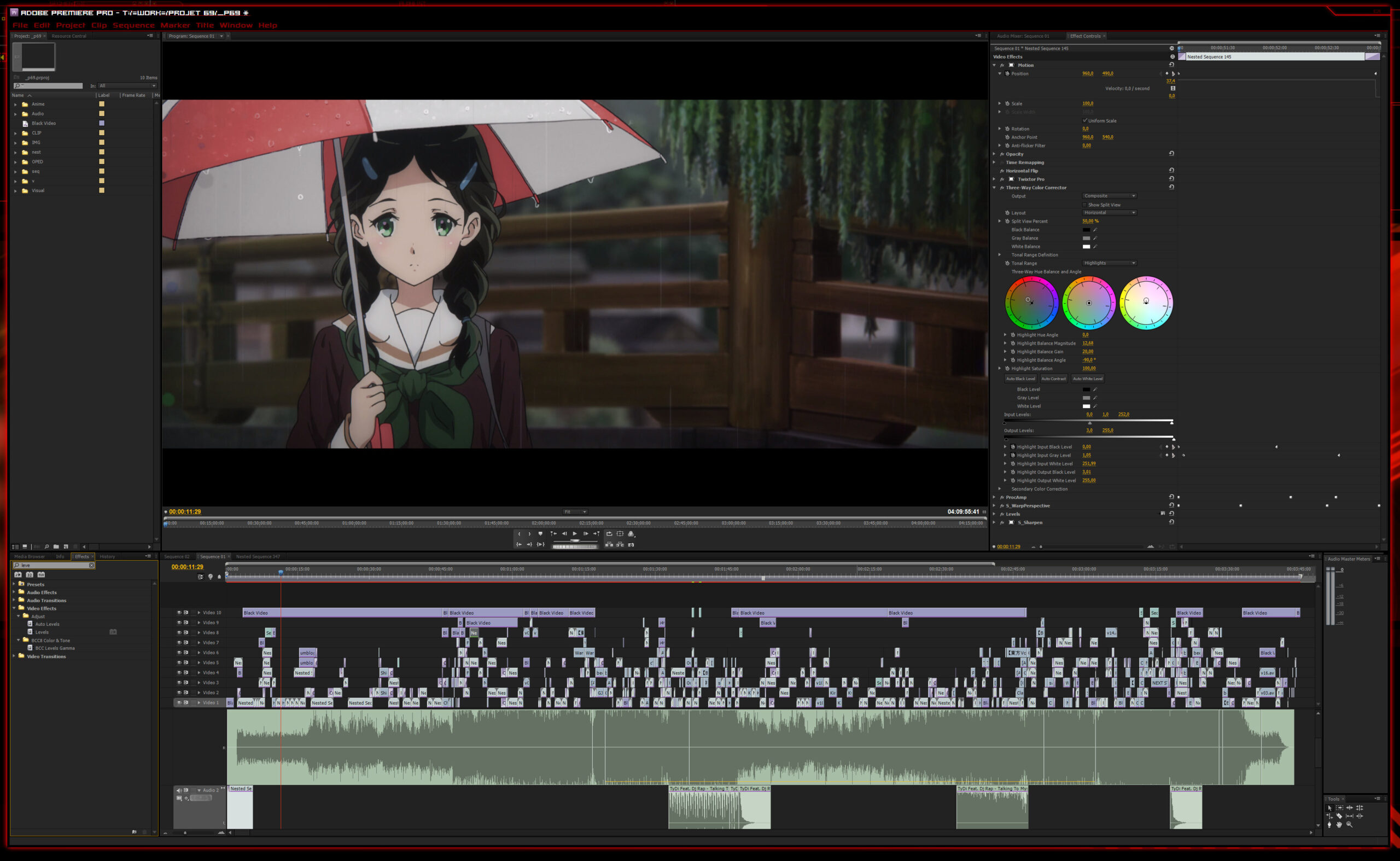